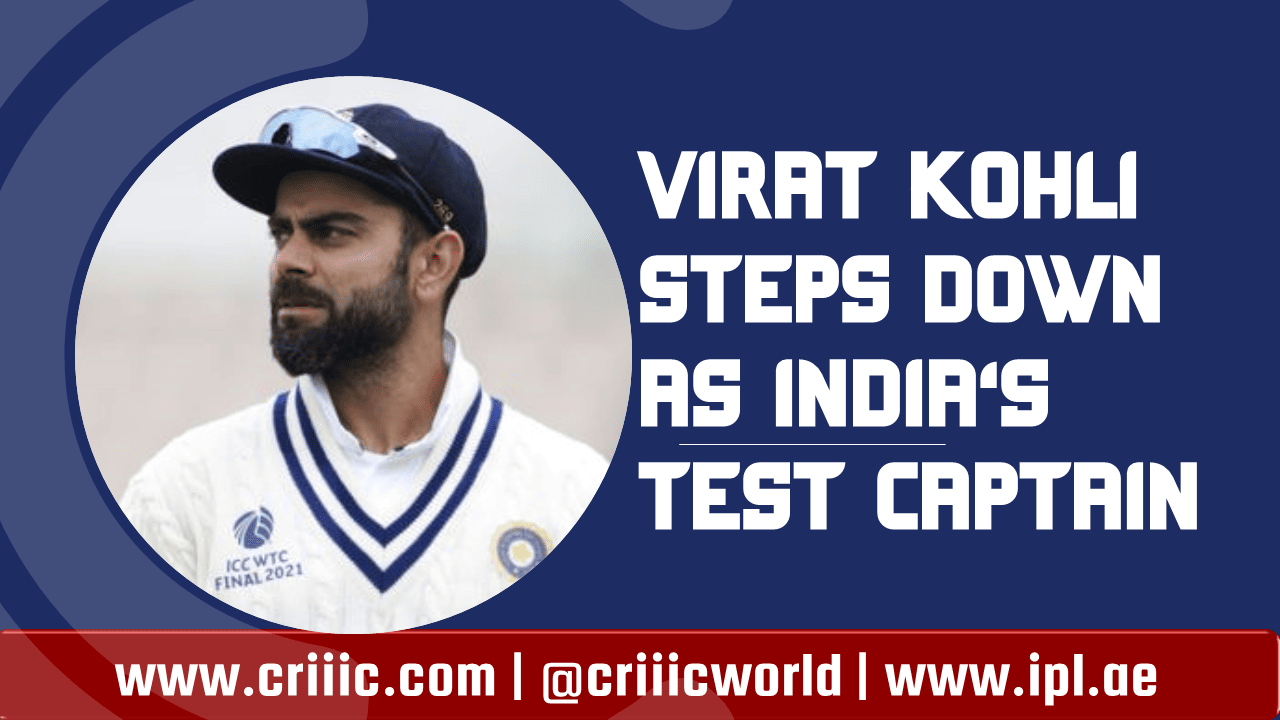 Virat Kohli stepped down as India’s test captain on Saturday. This comes after India lost to South Africa 2-1 on Friday in the Test series.

India’s and Asia’s Greatest Test Captain Virat Kohli: End of an absolute era, never thought he would give up Test captaincy this early.

The inevitable came a bit early as Virat Kohli on Saturday quit as India’s Test captain, saying he did his job with “absolute honesty” and time was right to quit the leadership role. – The Hindu.

“Every thing has to come to a halt at some stage and for me as Test captain of India, it’s now. There have been many ups and also some downs along the journey but there has never been lack of effort or lack of belief,” Kohli wrote in a statement which he posted on Instagram and Twitter, taking everyone by surprise.

“Everything has to come to a halt at some stage and for me as Test captain of India, it’s now”

Virat Kohli steps down as India Test captain Virat Kohli on Saturday, 15 January stated that he would be stepping down as captain of the Indian Test team. Kohli released a statement on his social media channels a day after India’s 2-1 series loss to South Africa in Cape Town, stating he would be stepping down from the role he has held on a permanent basis since 2015.

India has given to the world many a great cricketer but perhaps none as ambitious as Virat Kohli.

He wrote on Twitter, “It’s been 7 years of hard work, toil and relentless perseverance everyday to take the team in the right direction. I’ve done the job with absolute honesty and left nothing out there. Every thing has to come to a halt at
some stage and for me as Test Captain of India, it’s now. There have been many ups and also some downs along the
journey, but never has there been a lack of effort or lack of belief. I have always believed in giving my 120 percent in
everything I do, and if I can’t do that, I know it’s not the right thing to do. I have absolute clarity in my heart and I
cannot be dishonest to mv team. I want to thank the BCCI for giving me the opportunity to lead my country for such a long period of time and more importantly to all the teammates who bought into the vision I had for the team from day one and never gave up in any situation. You guys have made this journey so memorable and beautiful. To Ravi Bhai and the support group who were the engine behind this vehicle that moved us upwards in Test Cricket consistently, you all have played a massive role in bringing this vision to life. Lastly, a big thank vou to MS Dhoni who believed in me as a Captain and found me to be an able individual who could take Indian Cricket forward.”

“When Virat took over as Test captain, India winning a test overseas was an achievement, now if India lose an overseas test series it is an upset. And that’s how far he has taken Indian cricket forward, and that will be his legacy. Congratulations on successful reign @imVkohli” – Wassim Jaffer – He is the first ex cricketer to comment about Virat resignation.

Virat Batter’s Next Assignment: India’s next Test assignment is a two-match series against Sri Lanka at home in February-March, when Kohli is expected to play his 100th Test. The BCCI and selectors are likely to announce his successor as captain at the time of the squad selection.

Let us delve into some numbers to understand why Kohli should continue as the Indian skipper in Test cricket.

Kohli came back to India after the first Test in Adelaide to attend the birth of his daughter. And, in his absence, Ajinkya Rahane led from the front in a stunning manner. But then, a deep dive into the numbers has given us conclusive proof that there is absolutely no need for Kohli to step down as the Indian skipper.

He thrives with the willow when the added responsibility of leadership is thrust on him, he has one of the best win percentages as captain in the history of the game, and he is arguably the greatest Indian Test captain. Kohli will, and should continue as the skipper of the Indian Test side, and there is no doubt about the same. – Thank you crictracker.com for the statistics about Virat Captaincy.

Virat Kohli is the most successful full-time Indian captain in Tests both in terms of number of matches won and in terms of win percentage.

Four overseas Test victories in a calendar year: Kohli is the only Indian captain to achieve the feat twice. Incidentally, it was under Kohli’s captaincy when India achieved the feat for the first time as well.

India won Tests in Brisbane, Lord’s, Oval, and Centurion in one year, equalling the feat in 2018 when India began their away win campaign in Johannesburg, Nottingham, Adelaide, and Melbourne.

Only Asian skipper to win two Boxing Day fixtures: With the victory against South Africa, Virat became only the first Asian cricketer to lead his team to two wins in Boxing Day Test matches. Earlier, India had conquered Australia, Down Under in 2018, in a series that the visitors won by 2-1.

First Indian skipper to win two Test matches in South Africa: The 33-year-old has led India to two Test match victories against South Africa, he’s the only Indian captain to achieve this feat. Previously, India won a Test match in the rainbow nation under Kohli’s captaincy back in 2018. India now needs just one more win, to win a maiden Test series on South African soil.

Kohli had first led the side in Test cricket in 2014 against Australia. His last game as captain was the Cape Town Test in South Africa, which India lost by seven wickets. Filling the shoes of MS Dhoni was not going to be easy, but Kohli took leadership by storm, and quickly, he cemented himself as one of the best thinkers the country has seen in Test cricket.

The leadership also brought out the best in Kohli and it saw the batter registering seven double-centuries in the longest format of the game. Kohli also holds the record for scoring most Test centuries (20) as India captain.

It was under Kohli’s leadership that India was crowned the number one Test team in the ICC Rankings for a continuous period of 42 months from October 2016 till early March 2020.

Virat Kohli’s biggest win in the longest format came during 2018-19 as India won its first Test series Down Under. Under his captaincy, India also reached the finals of the World Test Championship (WTC).

It is also important to note that India was almost unbeatable under Kohli in home conditions. In the four Tests that India played against England in England last year, Kohli’s side went on to take a 2-1 lead and the last Test of the series will be played later this year.

Kohli has the most Test wins at home for India as captain. India’s victory against New Zealand at the Wankhede Stadium last year was Kohli’s 24th Test win at home. Virat – Most Successful Test Captain in the history!!!

Trending Keywords about Virat Kohli steps down as Captaincy