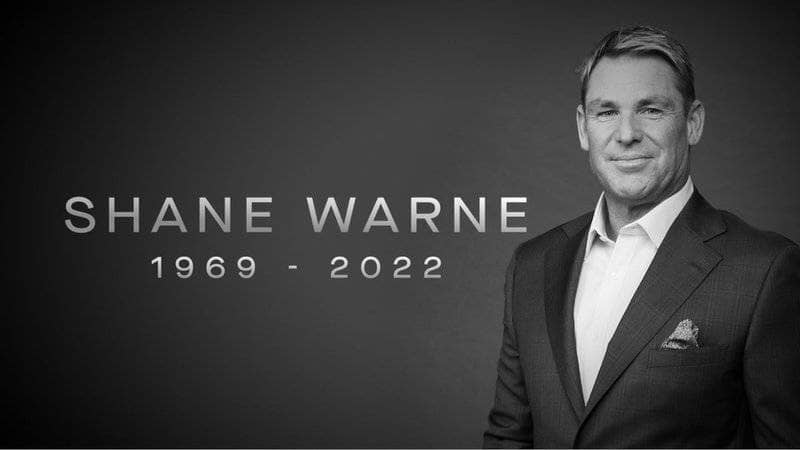 There are many hats Shane Warne wore — ‘king of spin’, maverick, colourful commentator and wonderful bowler and legendary cricketer!

King of Spin: Legendary Australian legspinner Shane Warne has died of a suspected heart attack at the age of 52. The former Australia spinner played 145 Tests and 194 ODIs between 1992 and 2007.

“It is with great sadness we advise that Shane Keith Warne popularly called as “King of Spins” passed away of a suspected heart attack in Koh Samui, Thailand today, Friday 4 March. Shane was found unresponsive in his villa and despite the best efforts of medical staff, he could not be revived. The family requests privacy at this time and will provide further details in due course,” said a statement from Warne’s management company MPC Entertainment.

Shane Keith Warne was an Australian cricketer. A right-arm leg spinner, he was widely considered one of the greatest bowlers in cricket history and he is the “King of Spins”.

Indian batters Virat Kohli and Rohit Sharma on Friday condoled the demise of legendary Australian cricketer Shane Warne. The iconic leg-spinner passed away in Thailand of a suspected heart attack, his management company said in a statement to Fox Sports.

Life is so fickle and unpredictable. I cannot process the passing of this great of our sport and also a person I got to know off the field. RIP #goat. Greatest to turn the cricket ball. pic.twitter.com/YtOkiBM53q

The leg-spinner was known for his guile bowling and took a total of 1001 wickets. He became the first-ever bowler to scale the peak of 1,000 international wickets.

I’m truly lost for words here, this is extremely sad. An absolute legend and champion of our game has left us. RIP Shane Warne….still can’t believe it

Shane Warne was one of the best leg-spinners to have embraced the game and was fondly known as ‘King of Spin’. Warne scalped 708 wickets in his illustrious career which spanned 145 Test matches.
Warne, who was named one of Wisden’s Five Cricketers of the Century, claimed 708 Test wickets in a 15-year career for Australia between 1992 and 2007, and was also an ODI World Cup winner in 1999.

Lightning in a bottle: An ode to Shane Warne

A special tribute to the King of Spin from the cricket.com.au features writer and editor, Adam Burnett

In your mind’s eye still you see him, standing calm atop his mark,

Ball in hand, it’s fizzing, as he looks around the park

He waits another heartbeat, points his fielders where to go,

His walk begins, deliberate, it builds towards its height,

He lets it go, the rest we know – has there been a better sight?

But now it’s gone forever, our sport will never be the same,

For where to start with Shane Keith Warne, that otherworldly gift?

We could talk about the wicked spin, the endless flight, the drift

We could talk about the wickets and the bluster and the guile,

We could talk about the character, the look, the hair, the smile

We could talk about charisma, a bush ballad come to life,

We could talk about the slider and the leg breaks and the flipper,

But single takes won’t encapsulate this giant of the sport,

This is Shane Warne – the king – the lightning in a bottle

For such a man we need to go beyond the one-off traits,

Where history meets destiny, and a wider legacy awaits

Think generations spellbound, think unique, one of a kind

Think mastery and sleight of hand unmatched in cricket’s lore,

Think phenomenon, a genius who allowed an art to soar

We can marvel at the theatre, a crowd expectant, still,

We’re all in awe and in his palm, the game bent to his will

We’re watching and we’re waiting as our showman owns the stage,

Then each of us will zero in on moments we hold dearest,

The balls that somehow shaped our lives, the ones we still see clearest

Richardson and Cullinan, you remember who was batting,

Gibbs and Strauss and Stewart, and you’ll always treasure Gatting

A hat-trick in the Ashes, a World Cup spun his way,

The comeback in Sri Lanka, that final Boxing Day

So take your pick and go there in the quiet of your mind,

See the wickets we can tally up, but the emotion we can’t measure,

The feelings that he stirred in us, the simple sense of pleasure

A chubby blond in cricket whites, he took a ball and twirled,

For fifteen years he cast his spell, bewitched the cricket world

He was just a bloke – extraordinary – but fallible and flawed,

It meant he felt like one of us, made him all the more adored

Which is why he’s left us grappling, left the cricket world defeated,

From Launceston to the Long Room, we’ve all been left depleted

But flip that thought and think instead how enriched we are by Warne,

Let’s salute a pure entertainer – the greatest bowler ever born.

Dear Fans. if you would like to write an article, publish photos, drawings and publish on here about Shane Warne, please share your article to mail: info@briomatic.com. Pay tributes to Shane Warne!